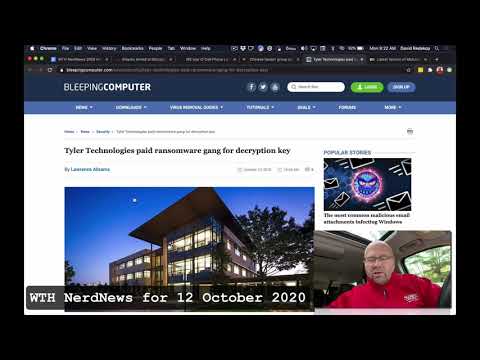 It is worth noting, that DTTS (Don’t Talk To Strangers) *never* allows any Trickbot-infected computer to reach the authors’ controllers.

Over the past 10 days, someone has been launching a series of coordinated attacks designed to disrupt Trickbot, an enormous collection of more than two million malware-infected Windows PCs that are constantly being harvested for financial data and are often used as the entry point for deploying ransomware within compromised organizations.

A government watchdog’s probe into Internal Revenue Service use of cell phone location data is likely to run into legal uncertainty about privacy protections for the data.

A Chinese-speaking hacking group has been observed using a UEFI bootkit to download and install additional malware on targeted computers.

To prove that the decryptor was valid, BleepingComputer was able to decrypt encrypted files uploaded to VirusTotal at the time of the ransomware attack.

Tyler Technologies has paid a ransom for a decryption key to recover files encrypted in a recent ransomware attack.

Tyler Technologies states that they are the largest software company in North America devoted to the public sector, with over $1.2 billion in revenue for 2020 and 5,500 employees.

Just can’t make this up. Ransomware on Android now.

Security researchers at Microsoft have spotted a dangerous new version of MalLocker, a constantly evolving Android ransomware family that has been floating around in the wild since at least 2014.

The FBI monitors the darkweb continuously. Via NC3 (National Cybercrime Unit of Canada) and subsequently the local London Police, Nerds On Site was alerted about being a potential victim of cybercrime. Be vigilant. Use 2FA everywhere.