Last one this year… enjoy! 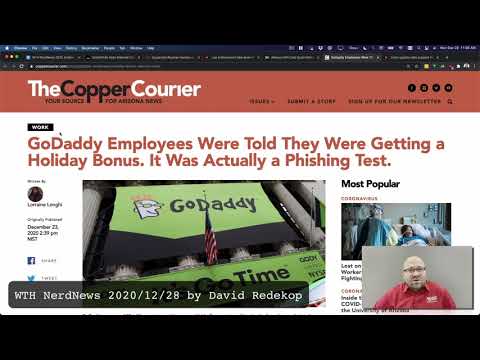 At least 15 critical infrastructure firms in the electric, oil, and manufacturing industries were running the backdoored SolarWinds Orion software (per @kimzetter).

The companies involved used compromised software, but it’s not clear if hackers entered their networks. Finding out could be difficult.

Reuters says that the hackers behind the SolarWinds breach used access to Microsoft resellers to penetrate targets that weren’t backdoored by SolarWinds at all. The hackers used access to the reseller, which sells Office licenses but also has access to client systems for maintenance and customer support, to try to read the Office 365 cloud email belonging to cybersecurity giant CrowdStrike. Luckily, CrowdStrike only uses Office desktop apps and not Office 365 for its email. Had it been, it would’ve been “game over,” per a source speaking to Reuters. (per @ZackWhittaker)

VPN technology is an important resource. Choosing your vendor is like navigating a minefield.

We all need reminders that something too good to be true, probably is.

The operators behind Dridex have a nefarious trick up their sleeves this holiday season: A widespread phishing scam promises victims a $100 Amazon gift card but instead delivers the prolific banking Trojan to target machines.

GoDaddy Employees Were Told They Were Getting a Holiday Bonus. It Was Actually a Phishing Test.

Interesting twist in this story: normally staff are educated, but here it’s the execs who did some learning.

Roughly 500 employees failed the test, which claimed they would receive a $650 bonus.

Read More: GoDaddy Employees Were Told They Were Getting a Holiday Bonus. It Was Actually a Phishing Test.