Happy Thanksgiving Canada! Even though is an official holiday for it, practicing gratitude daily has incredible benefits, including:

I personally am thankful for technological advancement, but it comes with a great deal of responsibility as well.

Nearly every device has drivers written by a third party. Drivers are needed to make peripherals work, or for security software to be able to do its job properly. A device driver with kernel level privileges is common. What is unfortunately common as well, is that such device drivers have been poorly developed, and therefore can be hijacked to abuse its power to disable security and monitoring software and that’s exactly what a number of ransomware groups have turned to: 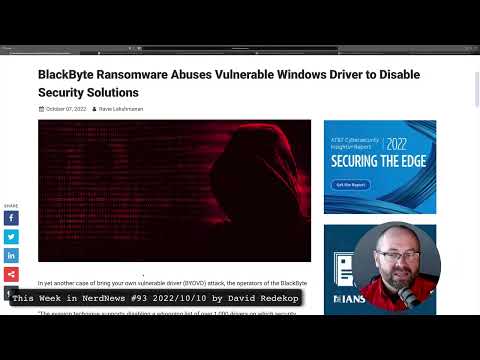 This is just another lesson in making sure that defense is down in depth. Zero Trust connectivity prevents the C2 connection from ever even starting.

In yet another case of bring your own vulnerable driver (BYOVD) attack, the operators of the BlackByte ransomware are leveraging a flaw in a legitimate Windows driver to bypass security solutions.

“The evasion technique supports disabling a whopping list of over 1,000 drivers on which security products rely to provide protection,” Sophos threat researcher Andreas Klopsch said in a new technical write-up.

This is so much more about lying to regulators than it is about lack of breach notification.

A former chief security officer for Uber was convicted Wednesday of federal charges stemming from payments he quietly authorized to hackers who breached the ride-hailing company in 2016.

It may not seem like a big deal, but it is. Ikea has released a fix, though,

Researchers have demonstrated how an attacker could take over control of light bulbs in the Ikea Trådfri smart lighting system, ultimately turning the bulbs up to full brightness — and users can’t turn them down through the app or the remote control.

“The vulnerability is due to the method (cpio) in which Zimbra’s antivirus engine (Amavis) scans inbound emails,” cybersecurity firm Rapid7 said.

A severe remote code execution vulnerability in Zimbra’s enterprise collaboration software and email platform is being actively exploited, with no patch currently available to remediate the issue.

The shortcoming, assigned CVE-2022-41352, carries a critical-severity rating of CVSS 9.8, providing a pathway for attackers to upload arbitrary files and carry out malicious actions on affected installations.

“The vulnerability is due to the method (cpio) in which Zimbra’s antivirus engine (Amavis) scans inbound emails,” cybersecurity firm Rapid7 said in an analysis published this week.

This shows how far law enforcement is willing to go after cyber criminals. We are used to seeing judgements stay well within, even below sentencing guidelines, but this judge went above and beyond the usual 12-15 year guideline.

Former Netwalker ransomware affiliate Sebastien Vachon-Desjardins has been sentenced to 20 years in prison and demanded to forfeit $21.5 million for his attacks on a Tampa company and other entities.

“The Defendant is hereby committed to the custody of the United States Bureau of Prisons to be imprisoned for a term of TWO HUNDRED FORTY (240) MONTHS,” reads the court’s judgment.

We are on the path of achieving some IoT harmony. Matter is a specification to connect all kinds of devices over a variety of protocols. Most importantly, when combined with Home Assistant, all the data can stay within your own control and not even touch the hands of big tech.